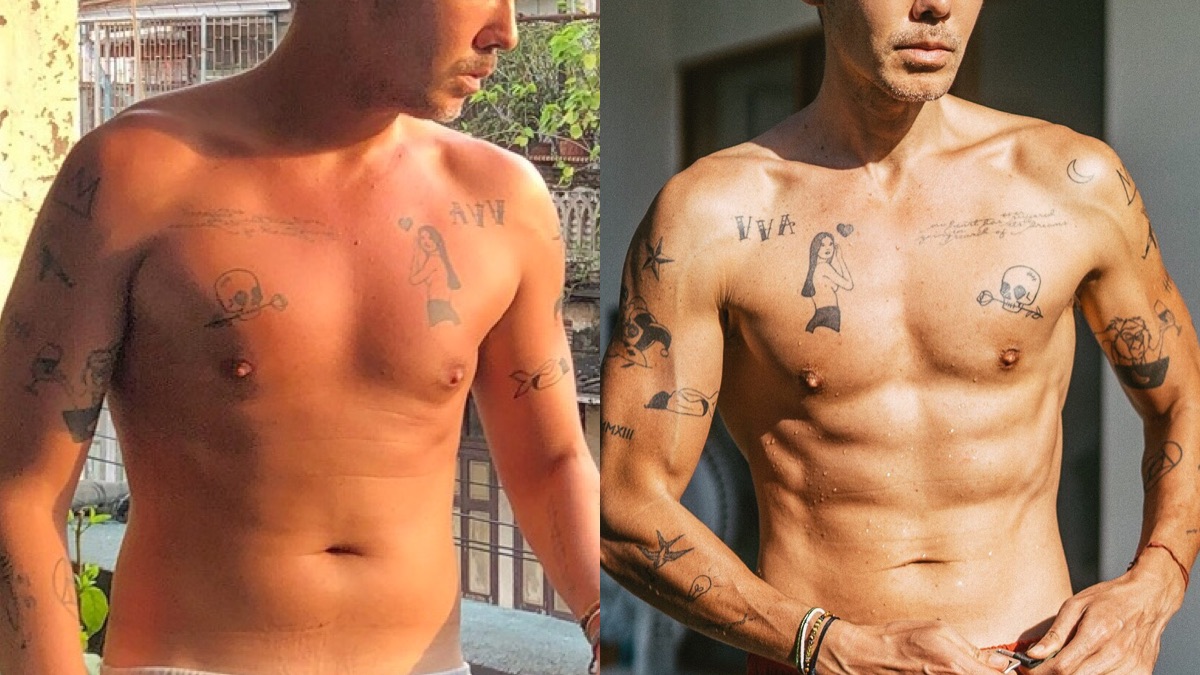 I decided the best way to start off this site is by showing you how I've changed because of keto.

I want you to know that this site is being written by a real person who has actually lived the keto lifestyle and succeeded with it. I'm 39, I love to eat and cook, and I've been doing keto for about a year in Singapore, Bali, Kuala Lumpur and Bangkok.

First I'll preface by saying that this isn't one of those "miracle" transformations you see on youtube. I was never super overweight, I just had a typical 39 year old "urban male office worker" body - too much time spent at the bar, eating unhealthy food, and not getting any exercise. Think: lovehandles and developing manboobs.

Everyone's journey will be different. Some of you will lose weight faster than this, some slower. But if you stick at it, you will achieve your target weight eventually. Here's my journey. 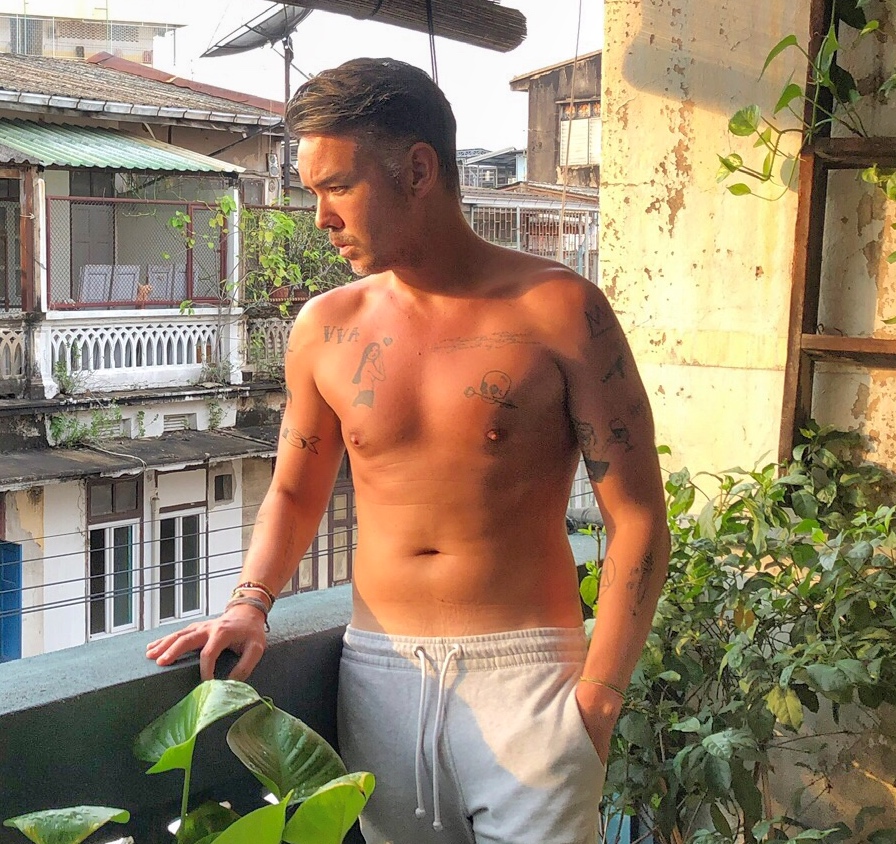 This was taken in Bangkok. I was staying in a very cool vintage shophouse in Chinatown. On my instagram I posted a slightly more flattering photo from this same series, where I had my back turned to the camera (hiding my body!).

I remember someone commenting "have you put on weight?".

I hadn't really realised it, but it was true. I had put on weight. Or maybe I had been subconsciously ignoring the fact that I had put on weight - it's easy as you get older to just make excuses for yourself and say "that's what happens when you get older!". This is true, but it doesn't mean you should give up and stop trying to be healthy.

It was around this time I started on the keto diet. 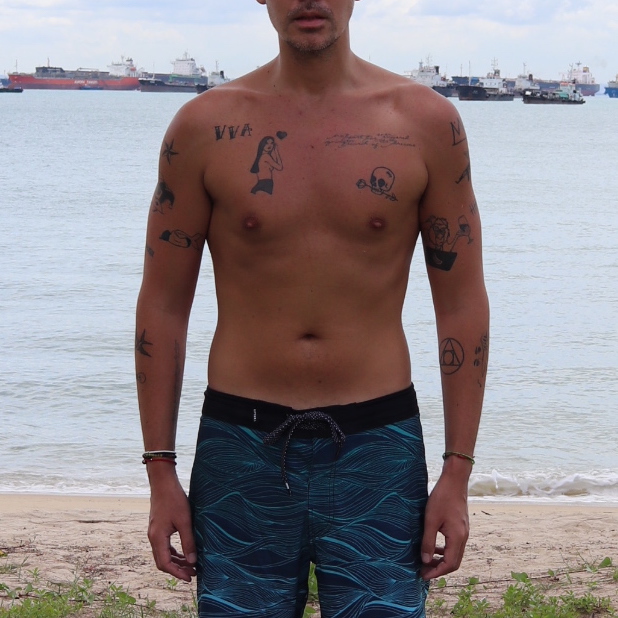 Taken at East Coast Park in Singapore. Even though I had done only 2 weeks on keto, I could already see a bit of a difference. Enough to make me think this is worth continuing, and so I did. 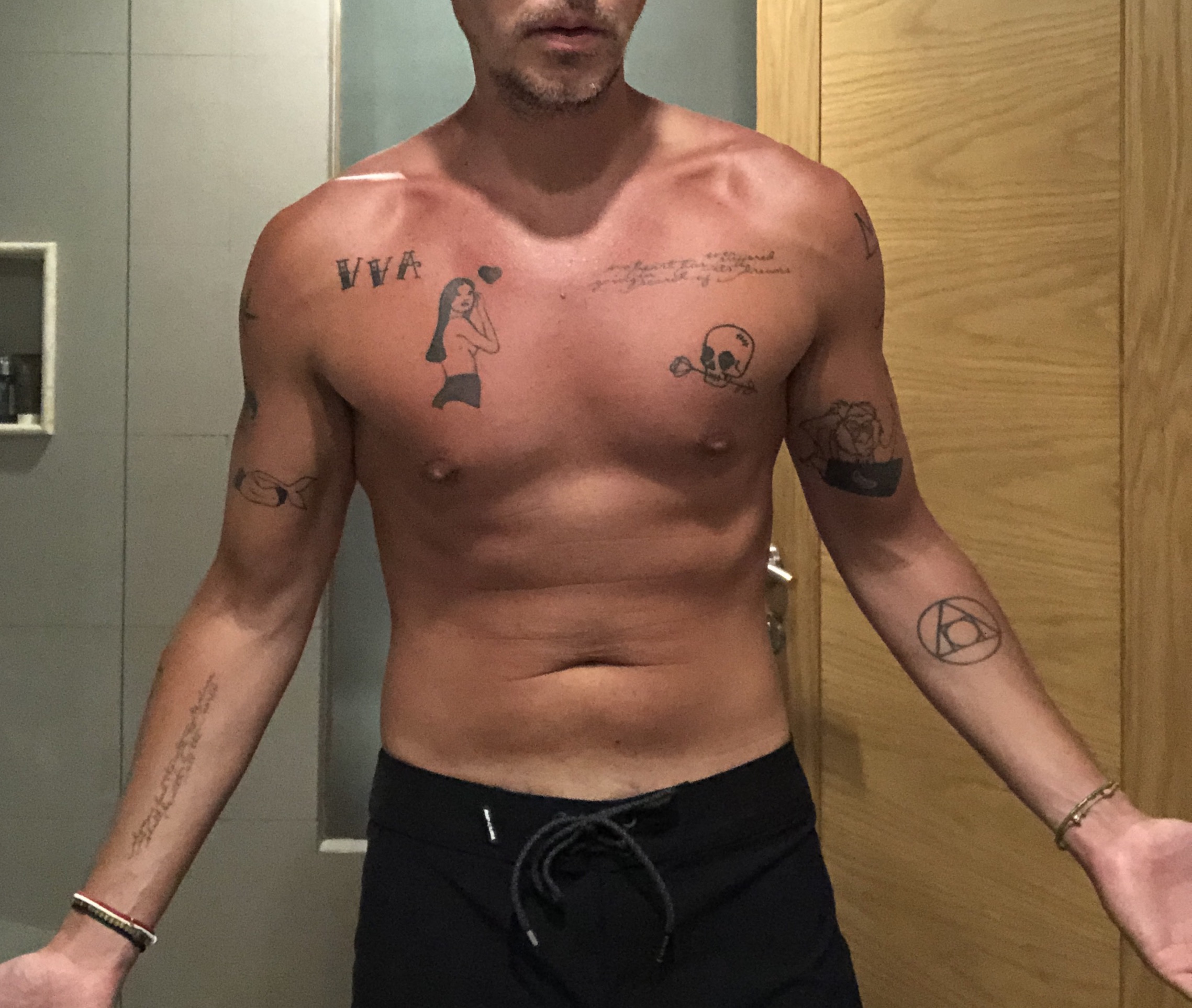 Pardon the sunburn, this photo was taken in Bali :) I was starting to lose the love-handles by this point. In the right lighting with a lot of clenching, I could even see some abs underneath the fat… that was motivating! I thought it would be a good target to have abs as a 40yo, so that's one of the targets I set for myself along with just general weight loss. 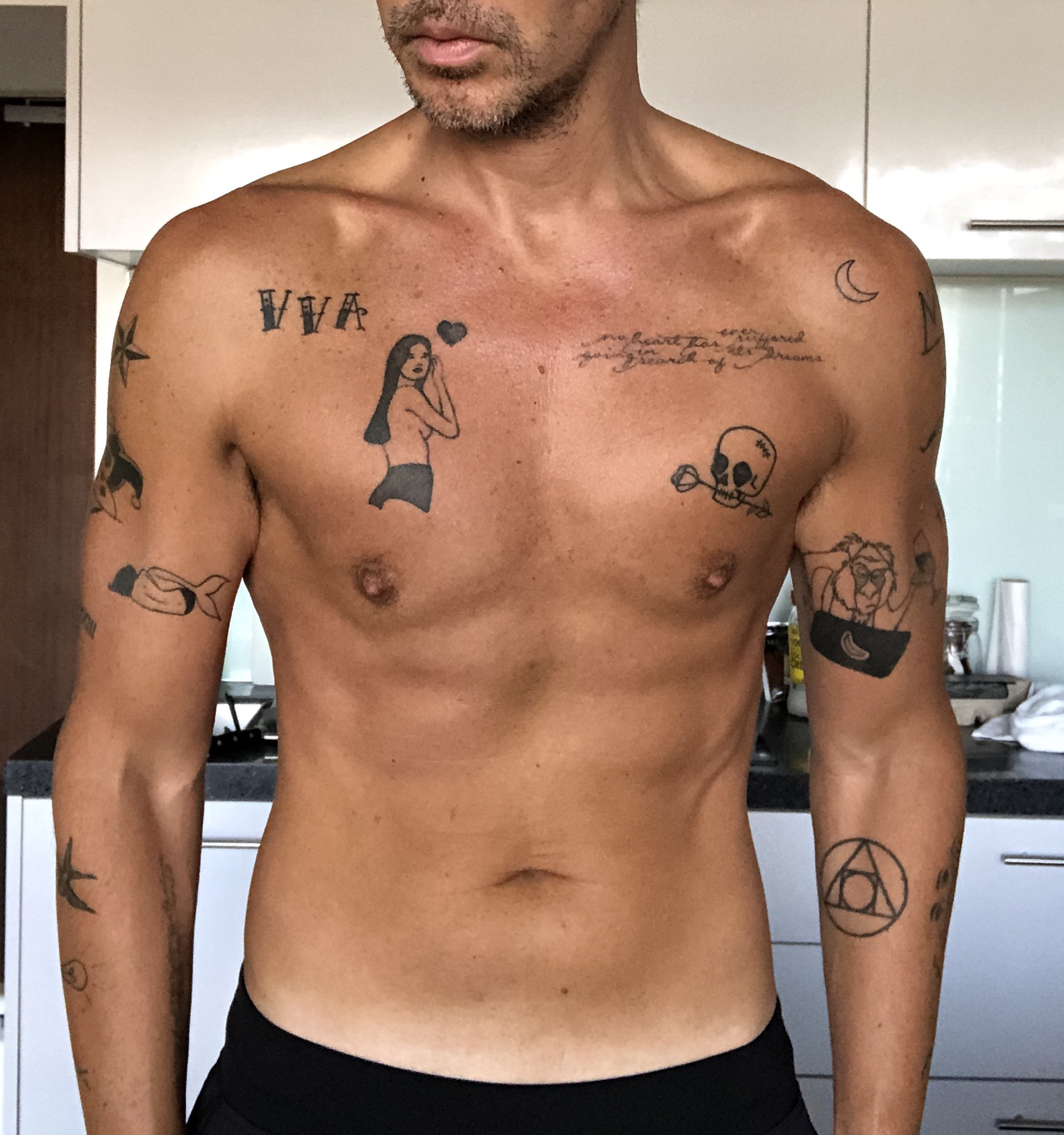 Along with the keto diet I changed two other things around December / January. I started going to the gym more often, about twice a week. Note that I never do any cardio (I hate it). I just lift weights.

I also drank less alcohol. Normally I would have alcohol 3 or 4 times a week (just red wine, my favourite) but I cut it back to 1 or 2 times a week. Keto, plus gym, plus less alcohol made for quite a big visual jump in fat loss compared to the previous month. Plus by this point I was already "fat adapted" so my body was burning fat for fuel. 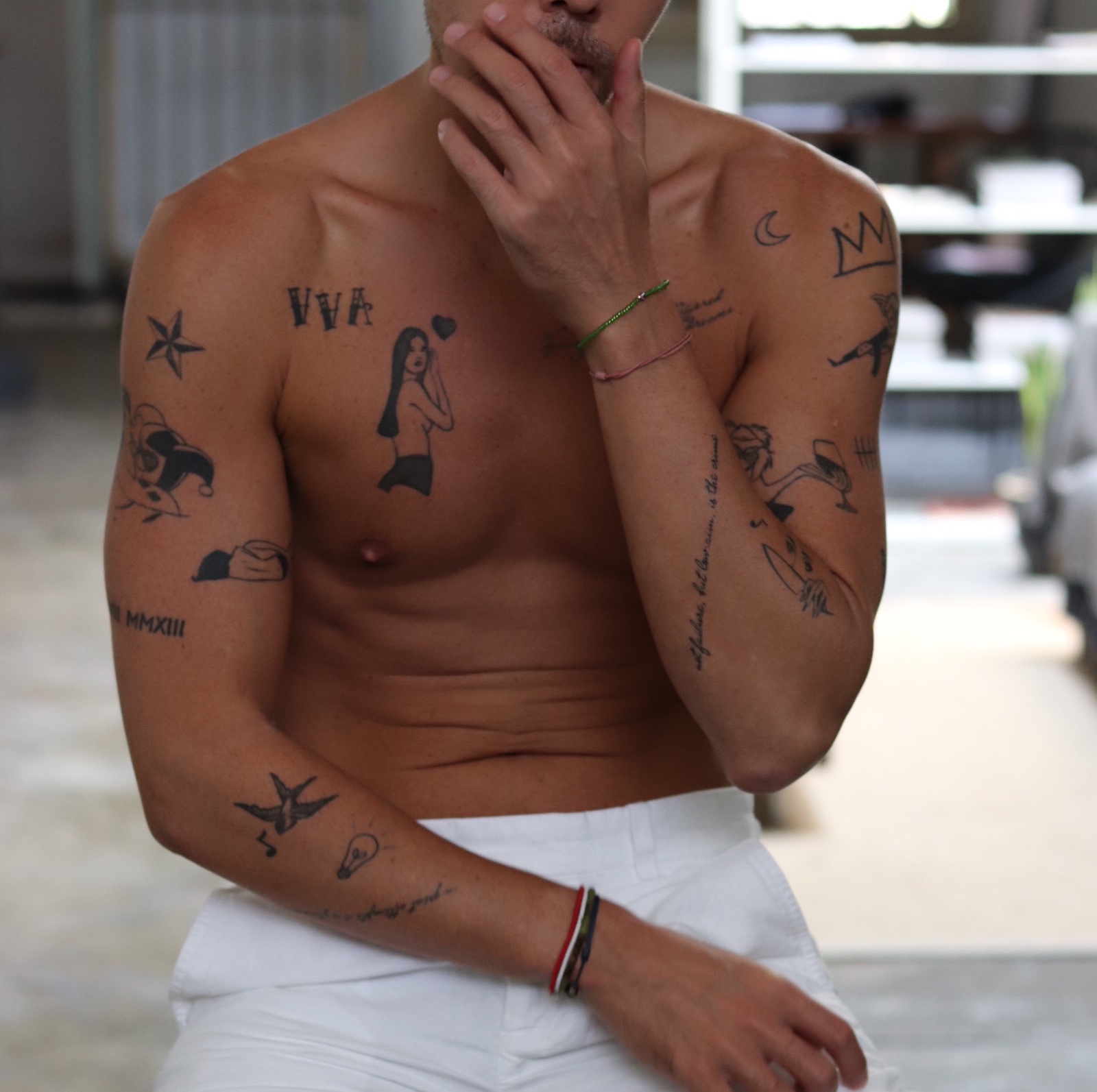 Now, when sitting down, my rolls of fat were a lot smaller! 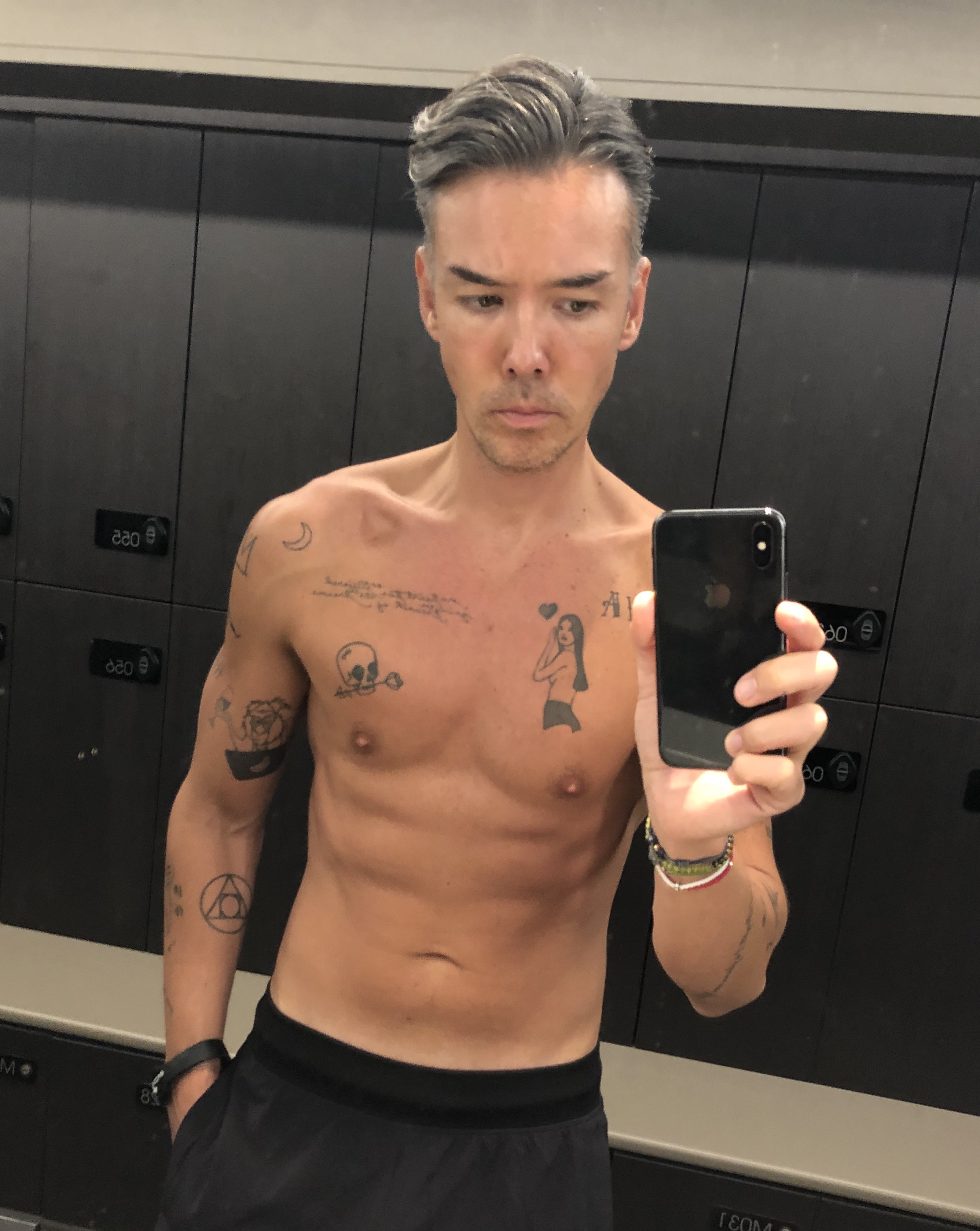 Taken at my gym in Bangkok. Yes, I became one of those guys who takes photos of themselves in the gym locker room. I used to think those guys were idiots, but once you realise how much hard work goes into keeping your body in shape (both in terms of nutrition and exercise), you too will feel the need to snap a few photos to record your progress! 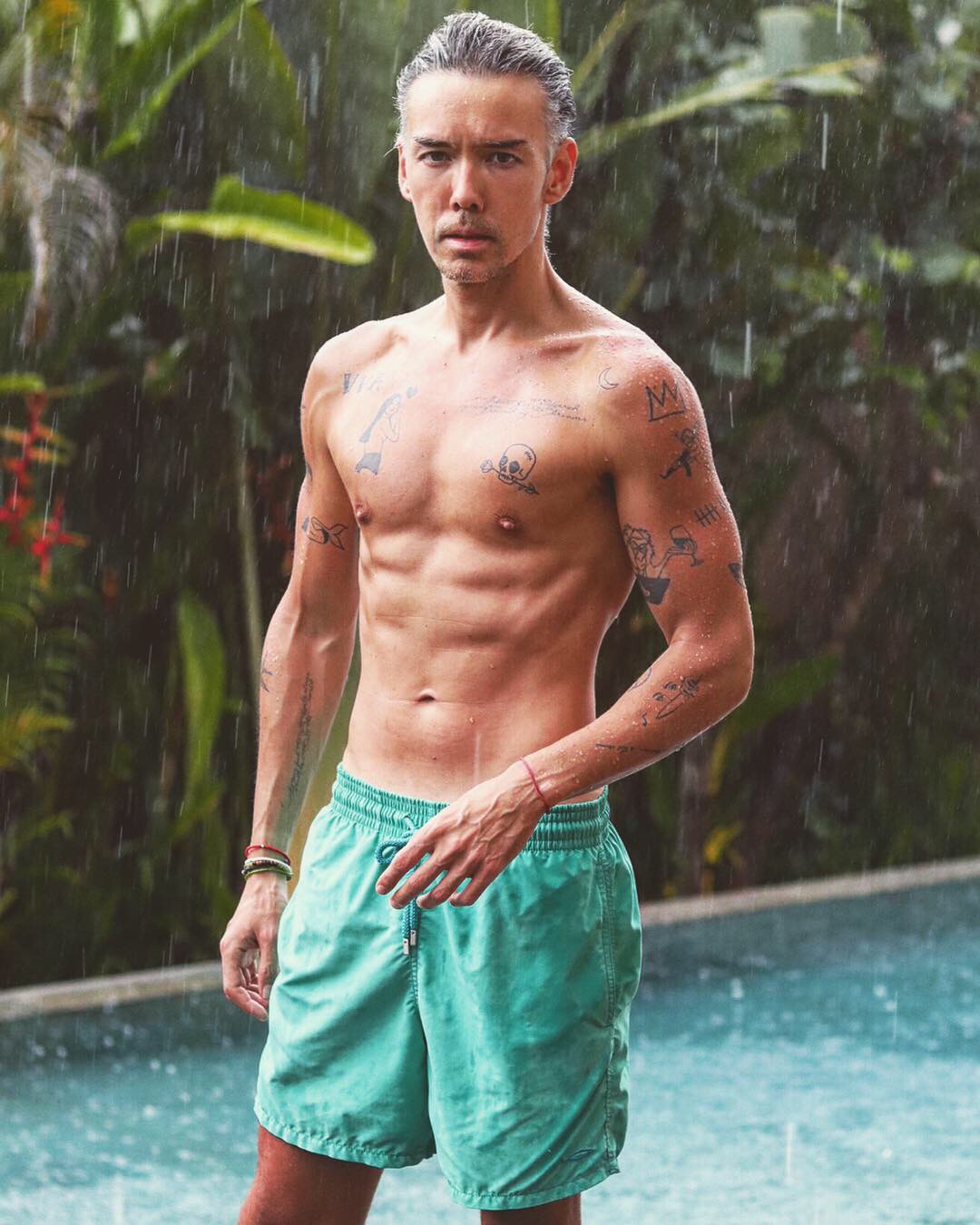 On my 39th birthday I decided to snap a gratuitous photo of myself using a proper camera. By this time people started commenting, saying I had abs. They aren't as defined here as they get later on, but that's how long it took for my weight to get to a point where people could see them - 6 months! 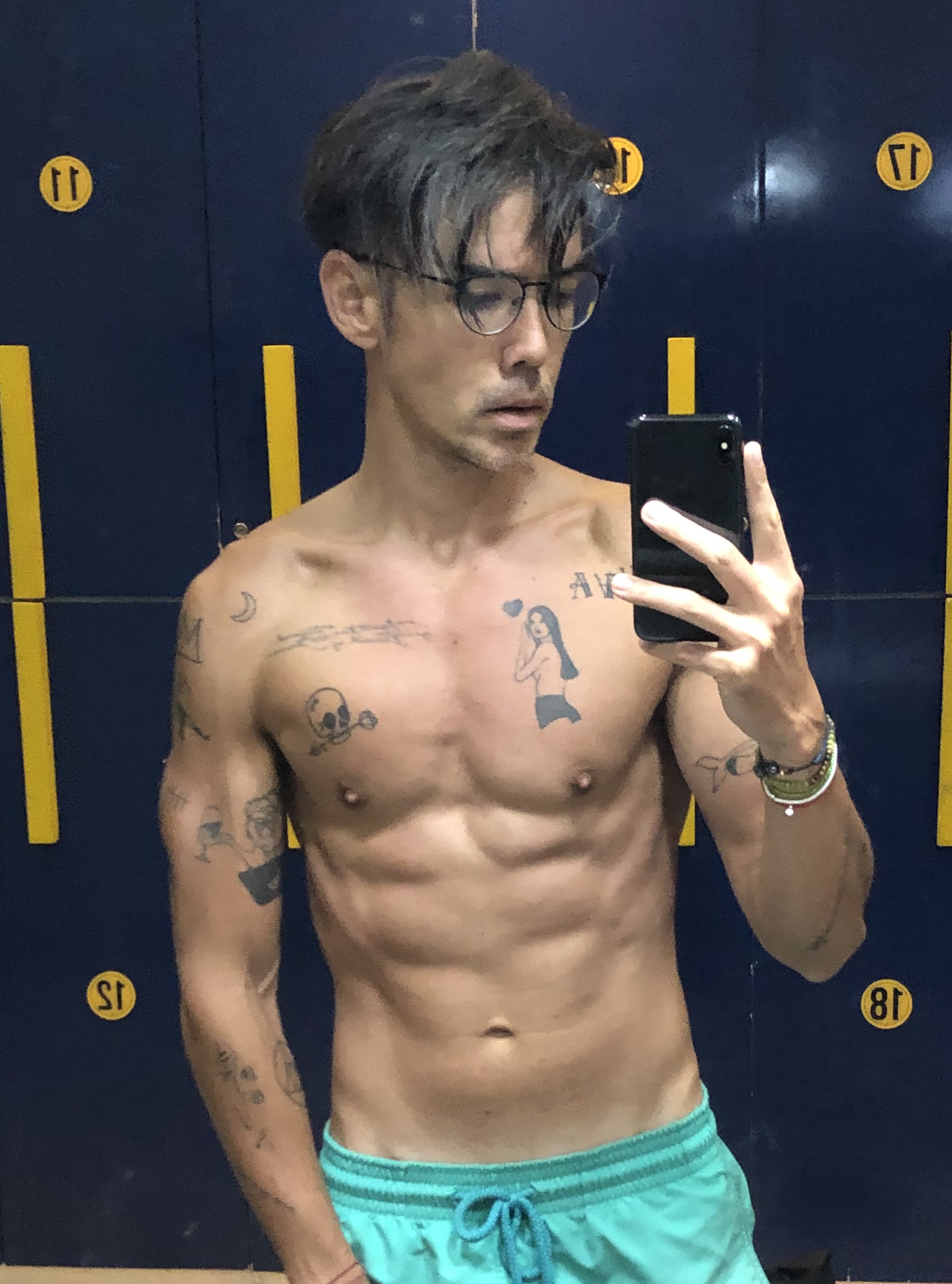 Another gym photo, this time in Bali. A tan also helps with muscle definition which is why I look especially lean here. 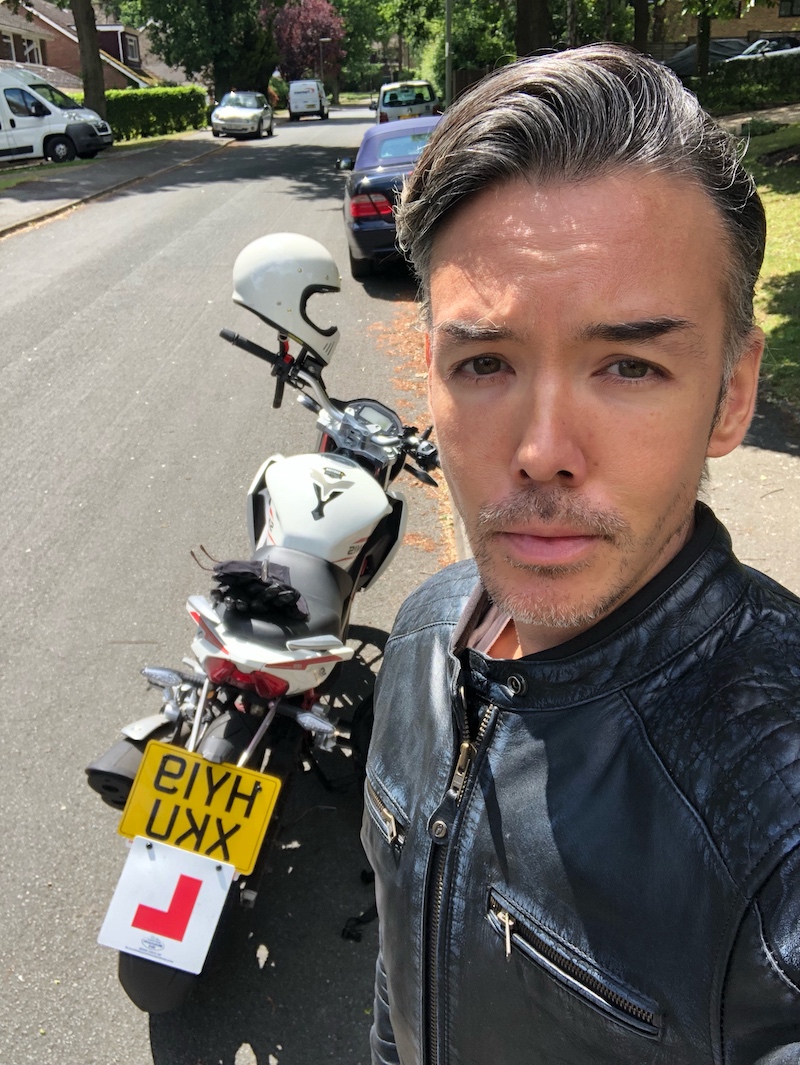 In June I flew back to the UK, consumed with a desire to get a motorcycle license (this type of thing happens when men reach middle age). I continued to go to the gym and stuck to the keto diet. I don't have many body photos from this month though, but here's a photo of me the day before I passed my final motorcycle test :) 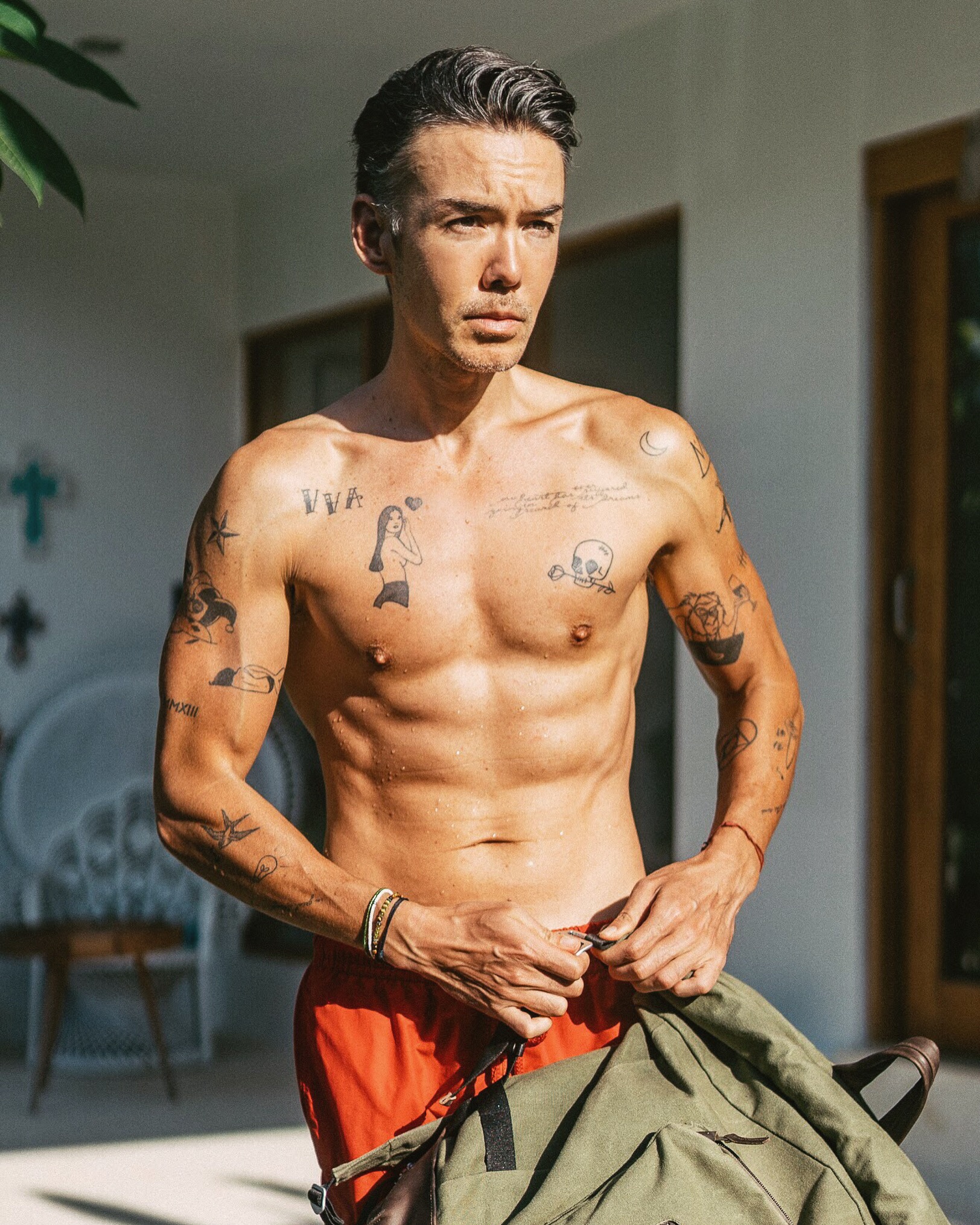 Back in Bali I did a shoot with a professional photographer to immortalize the progress so far.

After this I went back to Singapore and used one of those machines at the gym to test your body fat: 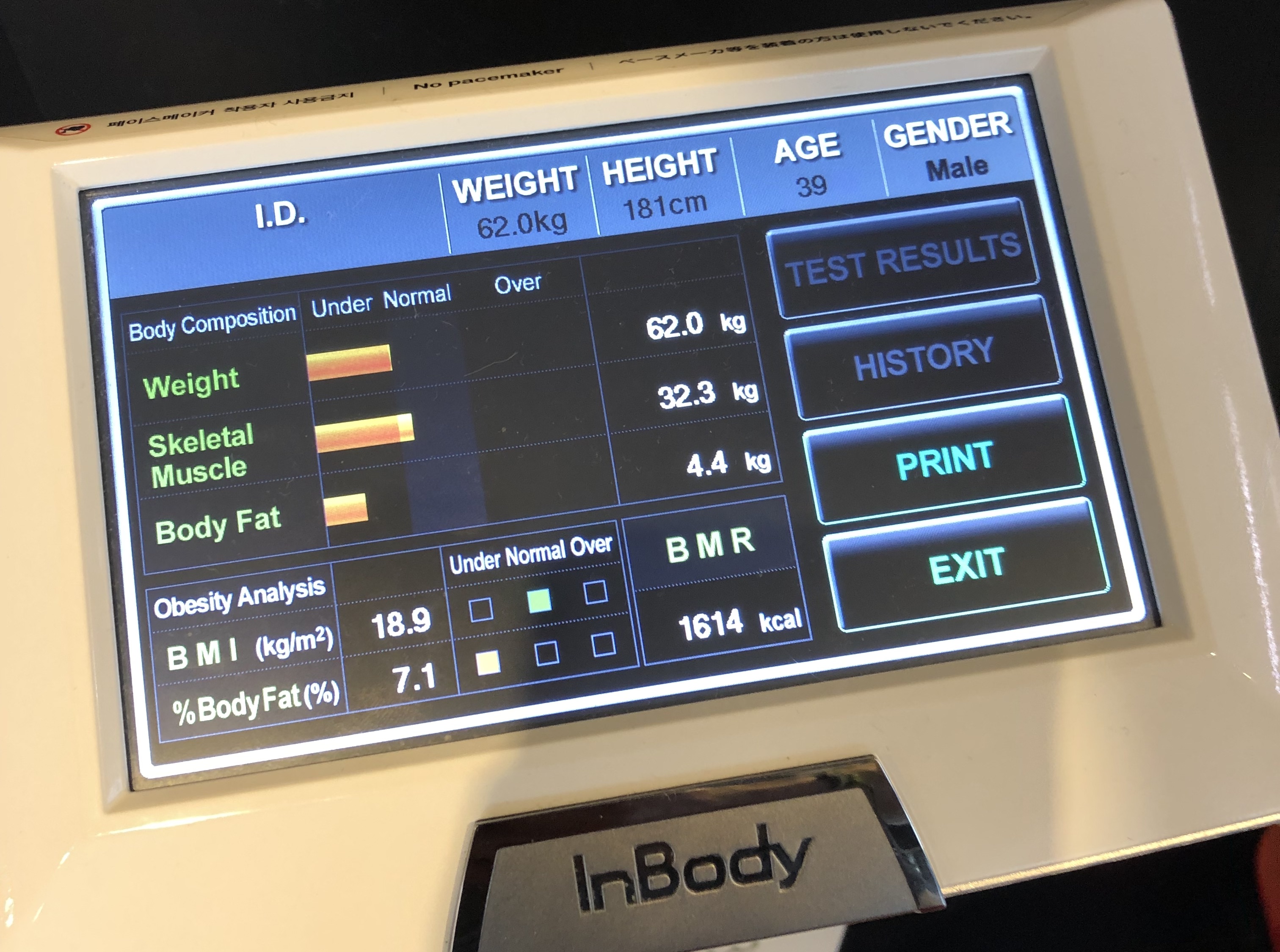 I was down to 7.1% body fat, which is very, very lean. Fat loss was no longer my goal, so I had to switch to more of a "maintenance mode" from that point onwards, where sometimes I would eat a bit of "good carbs" and also had a cheat day once a week. That seems to be working out just fine so far. 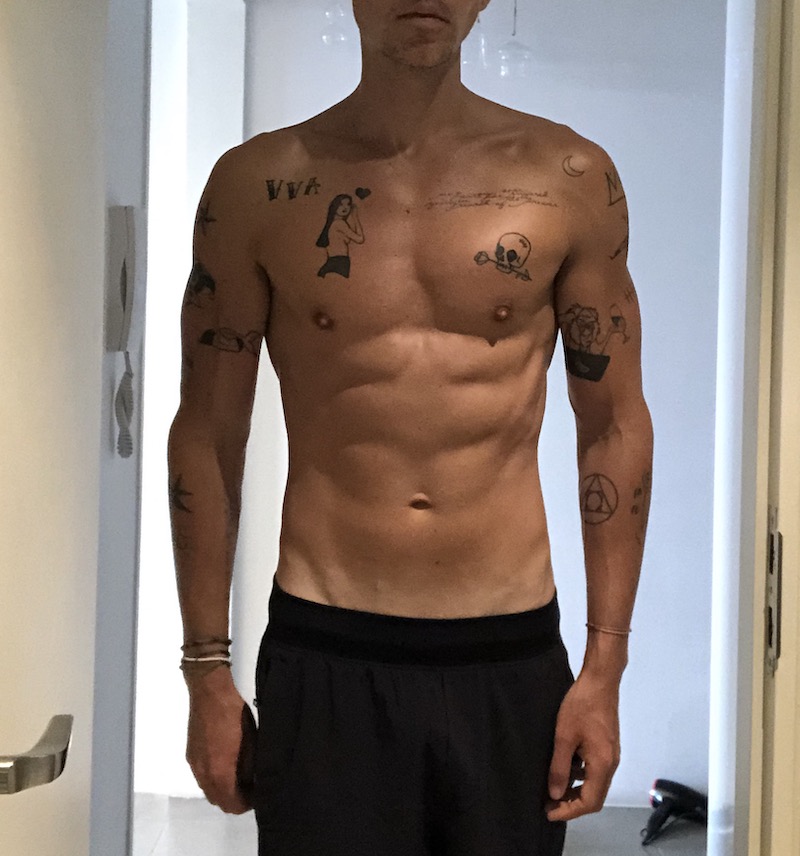 My body has pretty much settled into this shape and level of leanness. I'm still on keto, still going to the gym regularly, and if anything I'm trying to consume more calories now (in fat and protein form) to see if I can add on more muscle.

So that's my story so far.

On this site I'll be going into much more detail about what I ate over the last year. Sometimes it was eating out (which can be a challenge on keto, especially in Asia) and sometimes I cooked for myself - so I'll be writing out some recipes or meal planning ideas.

In bullet point form though, this is what my diet / exercise arc looked like: 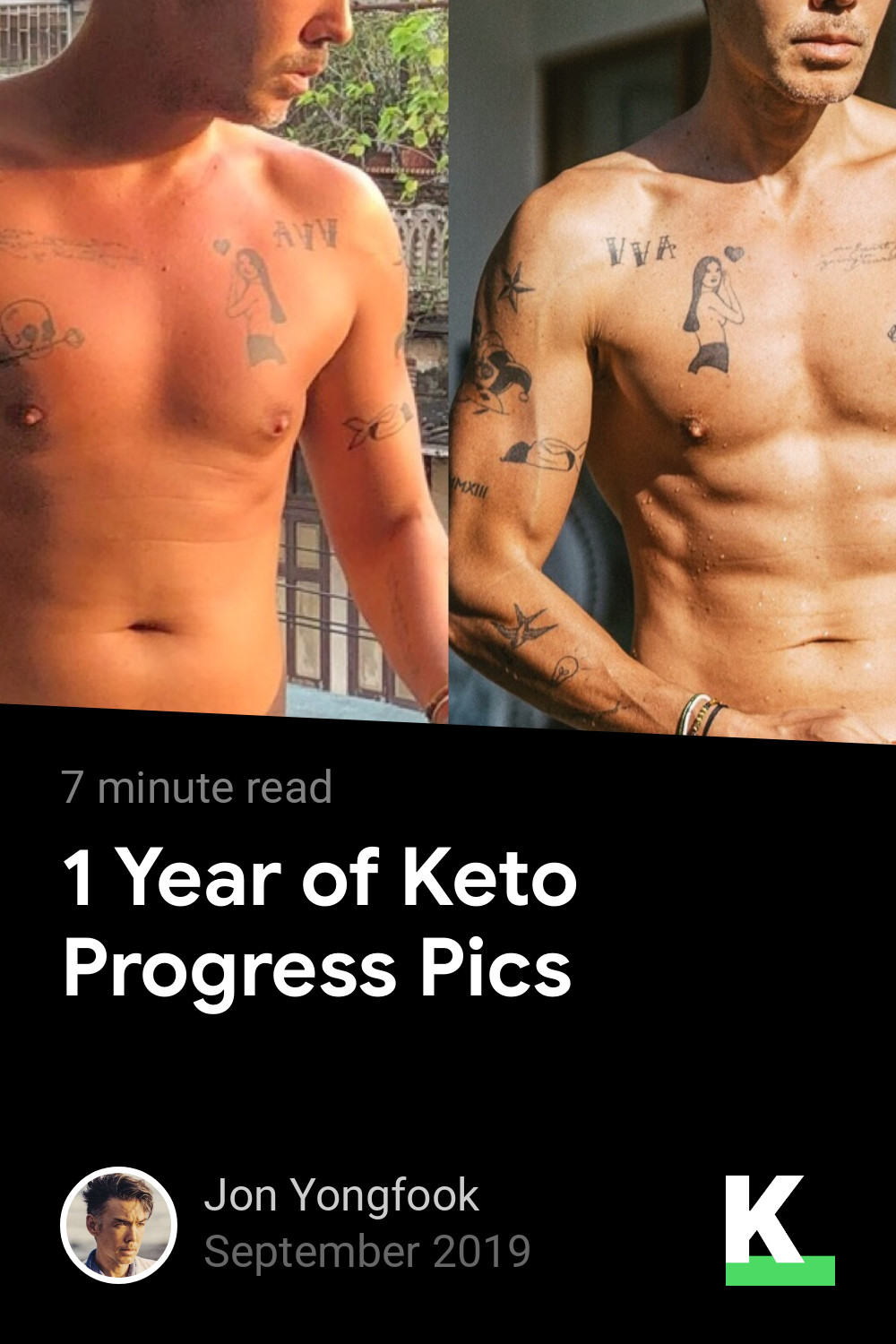 Jon is the founder of Far East Keto. He enjoys cooking, runs a software company by day, and has been living the keto life for a year. He dreams about one day owning a warehouse full of kitchen equipment and motorcycles.

Join other keto subscribers in Asia!